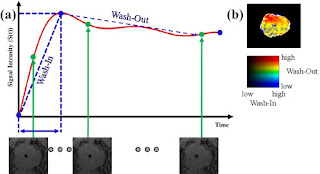 In order to precisely analyze the complex 3D DCE-MRI of the prostate, a novel processing frame work that consists of four main steps is proposed. The first step is to isolate the prostate from the surrounding anatomical structures based on a Maximum a Posteriori (MAP) estimate of a log likelihood function that accounts for the shape priori, the spatial interaction, and the current appearance of the prostate tissues and its background (surrounding anatomical structures).

In the second step, a non-rigid registration algorithm is employed to account for any local deformation that could occur in the prostate during the scanning process due to the patient’s breathing and local motion.

In the third step, the perfusion curves that show propagation of the contrast agent into the tissue are obtained from the segmented prostate of the whole image sequence of the patient.

In the final step, we collect two features from these curves and use a kn-Nearest Neighbor classifier classifier to distinguish between malignant and benign detected tumors.

Moreover, in this chapter, we introduce a new approach to generate color maps that illustrate the propagation of the contrast agent in the prostate tissues based on the analysis of the 3D spatial interaction of the change of the gray level values of prostate voxels using a Generalized Gauss-Markov Random Field (GGMRF) image model.

Popular posts from this blog

April 13, 2018
Overview This article presents a reference implementation of a Net Promoter score analysis project that is built by using Machine Learning. In this article, we will discuss associated generic models for holistically solving the problem of industrial Net Promoter score. We also measure the accuracy of models that are built by using Machine Learning and assess directions for further development. Net Promoter Score The Net Promoter Score is an index ranging from 0 to 10 that measures the customer’s loyalty to the brand. Calculation Customers are surveyed on one single question.  “On a scale of 0 to 10, how likely are you to recommend this company’s product or service to a friend or a colleague?” Based on their rating, customers are then classified into 3 categories: detractors, passives, and promoters. continue.......
2 comments
Read more

August 08, 2017
Linear regression is probably one of the first regression techniques we run across. It is useful for explaining (and perhaps forecasting) data that has a linear nature, but where the underlying process is unknown.  Linear regression line between New Patient Data and  Marketing Expenses   This solution focuses on the practical aspects of finding the best trend line for a financial time series using SQL function. If you have a large dataset with multiple sets of x and y data points associated with some attribute, you can do a linear regression on each set with one query using GroupID. The great strength of the linear regression line is that it can clarify sometimes ambiguous line charts and quantify the results via the slope of the line.
1 comment
Read more

January 14, 2017
This work is based on a Maximum a Posteriori (MAP) estimate of a log-likelihood function that accounts for the shape priori, the spatial interaction, and the current appearance of the tissues and its background (surrounding anatomical structures). Illustration of the Joint Markov-Gibbs random field (MGRF) image  model  Main references: Novel stochastic framework for accurate segmentation of prostate in dynamic contrast  enhanced MRI  International Workshop on Prostate Cancer Imaging, 121-130 A new 3D automatic segmentation framework for accurate segmentation of prostate from DCE-MRI  2011 IEEE International Symposium on Biomedical Imaging: From Nano to Macro
3 comments
Read more